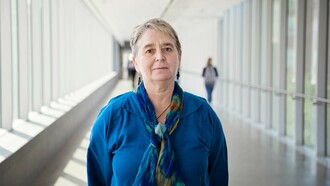 Dr. Denise Spitzer, a Public health professor and Alberta Women's Health Foundation-funded researcher at the University of Alberta, is currently leading an international research collaboration with survivors of forced sterilization and coerced contraception to share their stories, foster healing and advocate for change around the world.

Survivors of forced sterilization and coerced contraception from Canada, Peru and Indonesia will gather with academic researchers at a summit in Edmonton this summer to share stories, heal through art and ceremony, and set an agenda for change.

The full extent of reproductive control practices around the world is not known, but they have been historically — and continue to be — targeted at Indigenous, poor and migrant women, according to principal investigator Denise Spitzer, professor in the School of Public Health and former Canada Research Chair in Gender, Migration and Health.

“This non-consensual control over a woman's reproduction is a continuum of colonial violence, whether it's part of the past or the times that we're in now,” says steering committee member Josie Auger, associate professor at Athabasca University and author of My People’s Blood: Indigenous Sexual Health Recovery.

“Indigenous peoples, who are vulnerable and marginalized, are looked at as the other and over time, have been institutionalized in prisons, Indian hospitals and mental institutions (where such practices have been carried out),” says Auger, an elected councillor for the Bigstone Cree Nation from 2014 to 2018.

An estimated 200,000 to 350,000 women in Peru were forcibly sterilized in the 1990s under former president Alberto Fujimori and some are still seeking redress through the courts.

“The idea was that you would control the reproductive capacities of Indigenous women as a way to control population and to somehow improve the economic development of the country,” says Spitzer. “The scars left behind are both physical and psychological.”

Some of the women faced partner violence and marriage breakdown as a result of their sterilization, Spitzer says. They lost the potential economic support of children and never had the opportunity to pass on their culture and language to the next generation. Their fundamental human right to decide whether to be a parent was taken away.

In Indonesia in the 1990s, women were forcibly injected with a long-term contraceptive. Today, recruitment agencies compel Indonesian migrant workers to accept a long-term injectable contraceptive as a requirement of overseas deployment and they can be deported if they become pregnant.

In Canada, Indigenous women were forcibly sterilized under various historic government policies including Alberta’s Sexual Sterilization Act, which was in force from 1928, when the eugenics movement was gaining momentum, until 1972. At that time Indigenous people represented about 2.5 per cent of the population but made up 25 per cent of those who were sterilized, according to Auger.

A large number of sterilizations happened in Indian hospitals, where many women were forced to sign while in labour or otherwise medically vulnerable.

Reports of the practice continued long after the official policies were rescinded. And though coercive sterilization is recognized as a human rights violation, it is still not illegal under Canada's Criminal Code. In 2017 Senator Yvonne Boyer and physician Judith Bartlett published their findings on allegations of coerced tubal ligations at Saskatoon hospitals. More than 100 women from across Canada are now part of a class action suit for forced sterilizations that occurred between 2000 and 2010.

The summit will involve three days of storytelling, ceremony and art, culminating in a public exhibit at the Whiskeyjack Art House on August 19, which may include photovoice, weaving, film, dance and other art.

“Everything that we are doing together has a healing orientation,” says Spitzer. “We will share stories to collectively analyze what is going on and take what we’ve learned back to the communities — to women who are survivors, but also to policy makers and to health professionals.”

The international research team includes survivors, advocates, doctors and academics from the University of Alberta, Hong Kong, Peru and Indonesia. Both Auger and Spitzer say medical education will be critical to making change and making sure Indigenous women who share these experiences are heard and believed.

“We need to find ways to educate physicians about the pernicious ideas that underpin this practice and make them aware that this isn't just something historical, it’s not isolated,” says Spitzer. “It's happening now and it is really entrenched in racism and misogyny.”

The summit is the culmination of the first year of a three-year project, funded by the Kule Institute for Advanced Study, with additional funding from the Alberta Women's Health Foundation through the Women and Children’s Health Research Institute, a Killam Cornerstone Grant and a Social Sciences and Humanities Research Council Connection Grant.

The research agenda will be led by the survivors themselves.

“We will spend time talking, laughing, crying, creating art together, whatever it takes,” Spitzer says. “It’s those good relationships that are really integral to doing good research.”

“Creating life is a gift that must be carried on in order for these cultures to survive,” says Auger.

“If only people could open their hearts and understand what it’s like (for survivors of reproductive coercion)."

“Their choices were taken away.”

You can read more about the work of Dr. Denise Spitzer here.