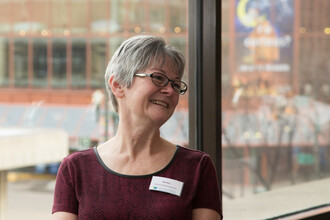 This dinner is held in honour and memory of one of their own, longtime staffer Pam Monastyrskyj, after Pam lost a lengthy and courageous battle with ovarian cancer. Funds from the dinner support the Edmonton Elks Women’s Ovarian Cancer Research Endowment Fund and Alberta Women’s Health Foundation⁠—aiming to improve the diagnosis, treatment strategies, and ultimately patient outcomes surrounding these diseases.

Every year, the Edmonton Elks give out an award called the “Pam’s Hero.” This award exists to “highlight an individual who brings positivity in the struggle against ovarian and women's cancers,” as Pam herself was such a force for positivity.

We are honoured to share that this year’s selection was posthumously awarded to Deb Key, received on her behalf by her husband, Frank Key, along with one of their two daughters, Miranda Key, at last night’s in-person Edmonton Elks Women’s Dinner.

“She wanted to ease suffering anywhere she could find it.”
- Frank Key, on his late wife Deb Key

Deb Key worked passionately for the Women and Children’s Health Research Institute (WCHRI) for many years until being diagnosed with ovarian cancer. After a courageous four-year battle, she eventually succumbed to the disease last year at home with her loving family, at the age of 64.

A special video tribute was shared at this year's dinner:

Members of the Edmonton Elks organization and Alberta Women’s Health Foundation had a chance to sit down with Deb’s husband, Frank Key, and daughter Billie-Jo Kaliel, ahead of the dinner to discuss the award, and what it means.

Above all, Deb was described as “very loving.” And by all accounts, she was one of the biggest huggers you’d ever meet, with one of the brightest smiles around.

To her, “family was number one.” Deb had ten siblings, and between them a combined 53 children and grandchildren. A big family, no doubt!

As Deb had relatives in Scotland, she and Frank flew over a few times to see them. Loving travel (and the outdoors), they had also visited the USA, New Zealand, and journeyed all the way across Canada four full times—three times in their motorhome.

But as much as she enjoyed seeing the world, it was for her community that Deb was particularly passionate. She actively volunteered and supported a number of charities and groups, including the Juvenile Diabetes Research Foundation (JDRF), Stollery Children’s Hospital Foundation, and so many others through WCHRI, participating in countless events, fundraisers, walks/runs, call-a-thons, and more.

On hearing that Deb was to be given this award, Frank shared that the prevailing emotion the family felt was pride. “Really, really proud of Deb,” he said. “It’s very fulfilling to find out others want to share their joy of being around her.”

When asked how Deb herself might feel about receiving the honour of being this year’s “Pam’s Hero,” Frank said, “Oh, she’d be terribly embarrassed.” He continued, “She always tried to shy away from the limelight, never wanted the attention. But she’d be extremely proud that she’d be thought of for this.”

In this, it seems Deb was particularly well-matched with WCHRI, often working behind-the-scenes to support research and solutions for women and children’s health conditions. Frank shared that her last eight or so years with WCHRI were probably the happiest she’d ever been, working for a cause she cared about so deeply.

As Frank said, “That was Deb: always doing a lot of the work, organizing things, and never wanting the credit—just wanting to see the results.”

This is the exact approach Deb took to many problems… including one particularly stubborn stump out at the family cabin. As Frank and Bille-Jo recalled, there was a stump that needed to be pulled out of the ground in order to clear the area. While they did not have a tractor to remove the stump, they did have a station wagon. And apparently that’s all Deb needed.

“We were half a mile away and we could hear the station wagon’s engine revving,” Frank chuckled. As the story goes, that engine was heard revving loudly for some time until Deb drove back to the rest of the family, dragging the stump still attached to the chain, and said, “There, now it’s not a problem anymore.”

Frank and Billie-Jo shared that her approach to her own cancer was similar: it was another problem to be solved. And her attitude about her cancer was that ‘it is’—not what it could or should be.

As Frank said of their collective hope to rid the world of ovarian cancers, “Science just takes time.”

Deb would likely be glad to hear of all the progress being made by—and funds being raised for—the team of Dr. Cheng-Han Lee, holder of the Sawin-Baldwin Chair in Ovarian Cancer.

On behalf of the Alberta Women’s Health Foundation and all those working to eradicate ovarian and women’s cancers, please join us in thanking Frank and Billie-Jo for helping us all get to know Deb better, thanking and honouring Deb for the many lives she touched and all the love she gave, and thanking the Edmonton Elks for leading the charge in fundraising for this important cause, and of course selecting Deb Key as this year’s “Pam’s Hero.”