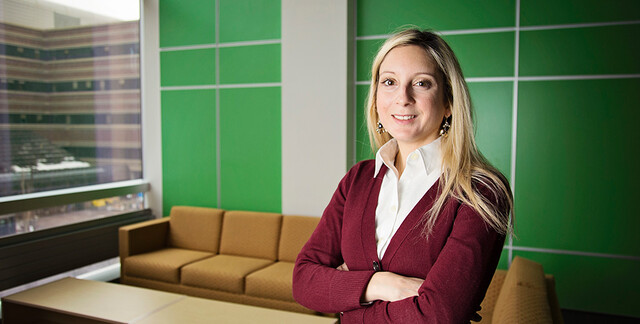 Red Dress Day was started in 2011 by Metis artist Jamie Black, based on her REDress art installation at the University of Winnipeg. Since then Red Dress Day has evolved into a grassroots movement day of action and reflection. Across the nation people hang red dresses in both public and private places in memory of those who are missing to call attention to disproportionate rates of violence against Indigenous people, especially women.

The Alberta Women’s Health Foundation is proud to fund many researchers focusing on Indigenous health and well-being.

Stephanie Montesanti, a WCHRI-funded researcher and associate professor at the School of Public Health at the University of Alberta, focuses on health policy, family violence, mental health and Indigenous health. In her report “Violence is a public-health problem,” Dr. Montesanti states that “we need to look at structural and cultural factors and, how these factors can contribute to high rates of violence. As a result, rates of violence are higher in vulnerable populations.”

You can read more about her work here:

Today, the Alberta Women’s Health Foundation remembers people who have lost their lives to colonial, gender-based violence, and the families and communities who live daily with the grief of losing loved ones.

You can mark the day by wearing red and posting it to social media, and use hashtags such as #MMIWG, #MMIWG2S, #RedDressDay, #WhyWeWearRed, and #NoMoreStolenSisters.