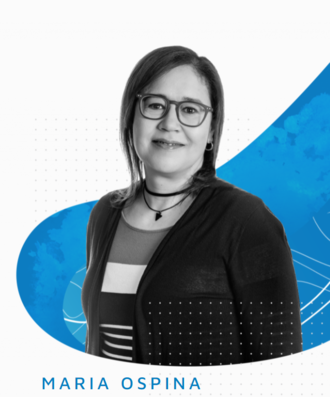 How do social and environmental factors affect long-term health—and what can be done to change the outcome?

Like an archaeologist, Maria Ospina sifts through the past to learn about where and how people lived, and then she connects those scenarios to health conditions like depression, asthma and cardiovascular disease.

The health researcher/data scientist describes herself as a “numbers-teller and a storyteller.” But her stories often reveal some difficult truths.

“Every time you identify gaps in equity, it’s uncomfortable for society,” says Ospina, an assistant professor of obstetrics and gynecology who in 2020 was named as a Canada Research Chair in Life Course, Social Environments and Health.

“We live in a publicly funded, universal healthcare system, we think we’re all equal,” she says. “We are not.”

Using population statistics like postal codes and census surveys, as well as databases from agencies like the Alberta Perinatal Health Program, Ospina triangulates health disorders against an array of geographic, social and economic information. Into that mix, she layers underlying social factors like discrimination, colonization and racism.

“Wherever you live leaves an imprint on who you are. How does your house look? How is your neighbourhood? What is your income? Who do you live with?” she says.

"I make that link between social factors that are a little bit more distant with individual health experiences and behaviours.”

One of her studies, which relied on postal codes as a geographic reference, showed adverse birth outcomes were more likely to be experienced by mothers living in poor, rural areas. Another study connected childhood respiratory problems to the social and material conditions of their upbringing.

Unlike an archaeologist, Ospina conducts these fact-finding missions with an eye to the future. By pinpointing where, how and why the healthcare system fails pregnant women and children, interventions could stop history from repeating itself.

“A major challenge of precision health right now is to identify the factors to prevent the development of these conditions,” she says. “That brings us back to pregnancy and early life—these sensitive and critical periods in life in which the influence of social and environmental have an important impact on shaping the longitudinal trajectory of future health for both mom and child.”

Changing the trajectory toward a healthier future will require society to change a deep-seated mindset that blames women for making poor health choices—without ever questioning why.

“‘Everything wrong that happens in pregnancy impacts your children. And so this is your fault.’ That’s the blaming message that sometimes we send to women,” says Ospina.

Ospina recently concluded a two-year study, done in partnership with the Métis Nation of Alberta (MNA), that looked at pregnancy and perinatal health among Métis in the province.

The final report will share Métis women’s stories of coping and resilience during pregnancy and childbirth alongside the research team’s analysis of statistical data.

Consider, says Ospina, the example of Indigenous women being reported as having higher rates of alcohol and substance use during pregnancy.

“Boom. You leave the story there and that message is awful and stigmatizing. Because you’re not taking into consideration other things,” she says.

“When you go back and talk with the women, you understand that in many cases using alcohol is the only way to cope with stress and from financial pressures, from food insecurity, from home insecurity, from discrimination. How do you blame this on alcohol only when you know all these things are happening?”

“We need a better understanding on how these social experiences influence women’s health behaviours, and also how they impact health outcomes as they get ‘under the skin’ and influence the ways our body works.”

“The evidence that we are able to produce to inform these relationships between social environments and health has a great potential to inform prevention and interventions to social groups that need them the most,” she says.

“The fact that I'm providing that support for that decision-making … that makes me super, super happy.”

Dr. Maria Ospina is supported by the Alberta Women’s Health Foundation through WCHRI.