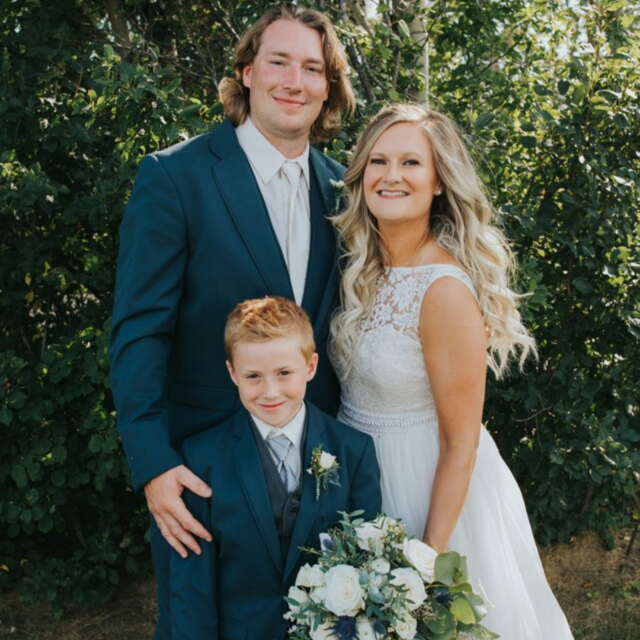 Allegra Tingley has been documenting her struggles with infertility on Instagram in the hopes that it might help others. This Mother's Day, she shares what the day means to her and what she hopes for the future.

Allegra Tingley plans to stay off social media as much as she can this Mother’s Day.

Photos of kids presenting their moms with homemade cards, bringing them breakfast in bed and spending the special day together are a painful reminder that she’s been unable to have a child of her own.

May 9—Allegra’s 32nd birthday—will mark the third Mother’s Day since the Redwater woman and her husband, Tyler Bonner, started trying to conceive. She’s never had a positive pregnancy test.

Now, two months after losing a precious embryo in an arduous round of in vitro fertilization (IVF), Allegra is trying to help others who are privately coping with infertility by speaking out.

“We’d been going through this for about 18 months before I started talking about it publicly,” she says. “I felt very alone, I felt a lot of shame in my diagnosis, I felt like my body had failed me.”

Typically guarded about personal matters, Allegra opened up initially to fend off pregnancy questions she knew would be coming at her stage of life, particularly after she married Tyler last August.

She was diagnosed with infertility issues in March 2020, at the onset of the COVID-19 pandemic. Since then, Allegra has learned first-hand how public health restrictions brought in since the start of the COVID crisis have forced many women to go through much of the painful infertility journey alone, without their partners beside them.

She’s also realized just how much about infertility remains unknown, and wants to pull back the curtain a bit.

“I didn’t feel comfortable opening up about it, so I did a deep dive into Instagram and I found this amazing community of women who have been going through something similar,” she says. “It’s been completely shocking how many people in my life have gone through something similar and did it privately. I just can’t imagine that pain because I’ve found so much support in being open about our journey.”

Allegra posts regularly about her struggle to conceive on Instagram, and has a saved Reels documenting the regimen of injections and medication she had to give herself while preparing for an egg retrieval procedure, which is part of IVF.

She posted when the couple’s “perfect little 4BB embryo” had been transferred to her uterus, and the heartbreaking update on March 5: a picture of a negative pregnancy test and nursery decor, surrounded by pill bottles and syringes.

“Even though it was ‘only’ an embryo, I loved it so much,” she wrote. “It wasn’t supposed to be like this.”

In fact, Allegra never dreamed it would be like this. A self-described Type A personality, she has met every goal she’s ever set for herself, from education to establishing her career—she’s a Chartered Professional Accountant (CPA) who works as a controller in the automotive industry. Things changed when she and Tyler started trying for a baby in August 2018.

“It was just month after month of disappointment,” she says, adding that, at first, she thought it was something she was doing wrong.

“I placed blame on the fact that I was running for maybe why we weren’t able to conceive, so I stopped everything. Every month I would analyze what I did—was it because I ran x number of kilometres, was it because I had too much coffee, was it because I ate vegetables that weren’t organic? You start analyzing every single aspect of your life trying to find the reason why it’s not working.”

Eventually, she and Tyler sought help growing their family (Allegra is stepmother to Tyler’s son, Chase, from a previous relationship).

Her GP felt it was likely a timing issue, so Allegra started tracking her ovulation and trying timed intercourse.

In October 2019 she had an ultrasound, but nobody called her with the results.

She got busy at work, and didn’t see her doctor again until March 2020.

He pulled up the ultrasound from five months prior and saw what looked like hydrosalpinx, a condition where the fallopian tubes are blocked with fluid, that is usually treated with surgery.

He referred Allegra to an ob-gyn, and she got in to see the specialist on March 13, 2020—hours before the office shut down due to the pandemic. The specialist confirmed the diagnosis of hydrosalpinx and referred Allegra to a private fertility clinic, the Pacific Centre for Reproductive Medicine (PCRM) in Edmonton. That clinic also closed operations in response to the coronavirus crisis, however, on March 19.

“It felt like we fell off a cliff,” says Allegra. “We received this diagnosis—right as everything was shutting down—that confirmed all of my worst fears, but then [we learned] that help wasn’t going to be available for some undetermined amount of time.”

From there, it was a waiting game. Allegra was baffled as to why PCRM was shut down while so many would-be parents were depending on it.

“It was frustrating to hear that my fertility wasn’t considered essential. I could go to West Edmonton Mall with my husband, but we couldn’t grow our family,” she says.

“People were joking about the pandemic baby boom; meanwhile, there were hundreds of women affected by this closure and all I could think about was the backlog of clients trying to get through the system.”

She also worried about how much the shutdown was affecting her wait time for surgery.

“Every single month, every cycle that the clinic was closed was another month that I wasn’t able to get pregnant, and it was just delaying our family.”

After the clinic reopened and summer came, Allegra had an “incredibly painful” procedure to confirm her tubes were blocked.

Surprisingly, however, it was determined her tubes weren’t blocked, and Allegra was told she wouldn’t need surgery after all.

Her infertility was declared “unexplained,” a diagnosis that highlights for her the gaps in research on women’s health.

“I find it strange that it’s 2021 and there are still so many aspects of women’s fertility that are unknown—after everything we’ve gone through, all the tests that we’ve done, all the doctors that we’ve seen, they just don’t have any answers. And it’s common to get to the end of this and not have answers,” she says, stressing she has no complaints about the “wonderful” care she’s received at the clinic.

“The doctors at PCRM are highly qualified, they’re incredible at their jobs, but they can only go so far. I feel they’re limited by the research that’s been done.”

The research gap is well-documented and the field historically underfunded. In the U.K., for example, erectile dysfunction, which affects 19 per cent of men, has been researched five times more than premenstrual syndrome, which affects 90 per cent of women.

The disparity has become a hot button issue during the pandemic as well. A recent opinion piece in the New York Times on whether COVID-19 vaccines could temporarily affect menstruation revealed clinical vaccine trials typically don’t even track menstrual cycles.

“Scientists are still in the dark about so much of female health,” wrote Alice Lu-Culligan and Randi Hutter Epstein, both of the Yale School of Medicine.

Closer to home, the Alberta Women’s Health Foundation is spearheading a campaign called #RefocusTheResearch to shift attention and funding from women’s appearances to women’s health where research and policy are concerned.

Since Allegra went public with her struggle, she’s learned many women want to be proactive about their future fertility but have their concerns brushed off.

“Instead of figuring out what the underlying issue is, women are just constantly put on birth control, and it just masks the symptoms until they go off of it and realize that there’s something else going on,” she says.

“I wish they would go beyond just a quick pap.”

Allegra has now undergone two rounds of intrauterine insemination (IUI) along with the round of IVF in early 2021. Due to COVID-19 restrictions, she had to attend the majority of her appointments alone while Tyler waited in the parking lot. The regimen of medications and injections—once, she gave herself an injection in her abdomen at her desk at work—took a toll.

“The hormonal changes can cause migraines, intense mood swings, you name it. Basically it is like PMS on steroids. I felt like I had no control over my emotions.”

Allegra’s rollercoaster journey is happening in real time. Worry that something was wrong with her tubes has persisted, driven by the on-again, off-again diagnosis. The day after speaking for this interview, Allegra went for another test—one that she had pushed for.

It turns out she does have hydrosalpinx in her left tube.

“I cannot tell you how frustrated I am,” she wrote in an email after the test.

“The fluid from my infected tube is toxic to both sperm and embryo, so as long as that tube is present we will never get pregnant. I wish I would've known this before we transferred our first embryo.”

She’s now going on a cancellation list for surgery and is trying her best to focus on the future—and the possibility that her infertility might no longer be unexplained. She’s started seeing an infertility trauma therapist. A second round of IVF—the first cost the couple more than $18,000—isn’t off the table, but Allegra isn’t sure she wants to do it this year.

“It’s tough because I still have a mom on Mother’s Day, but I just kind of want to pass over the weekend,”  she says, adding there are many “layers” to Mother’s Day that make it a complicated time for her.

Nine-year-old Chase has been part of her life since he was born. But she’s always respected that Mother’s Day is about Chase’s mom.

“She’s such an incredible mother and I never want to step on anyone’s toes,” she says.

“I’ve never asked for that recognition; it’s just sort of an internal conflict with me. My husband is a father, so Mother’s Day has also been painful in that I don’t really know where I fall, if I have a right to celebrate it. Every Mother’s Day I’m not a mother, but every Father’s Day, he’s a father.”

Allegra had hoped that, this Mother’s Day, she’d have a pregnancy of her own to celebrate.

“I just want people to be mindful that it’s not always a celebrated time,” she says.

For friends and family of people struggling with infertility, Allegra has some hard-won wisdom to pass along.

“The biggest thing is not offering solutions,” she says. “I really want to stress that—just to not offer advice, because we’re paying doctors thousands of dollars for advice. Give us space to grieve, and feel everything that we need to feel with this.”

It is the AWHF's mission to foster equity in women’s health, close gaps that exist in research today, and connect pathways from lab to life. Show your support for women like Allegra from across Alberta and beyond with a gift to the AWHF.

This story is about Allegra Tingley from Redwater, written based on an interview with the AWHF and posted with her permission, and has been reposted here on the Royal Alex website.